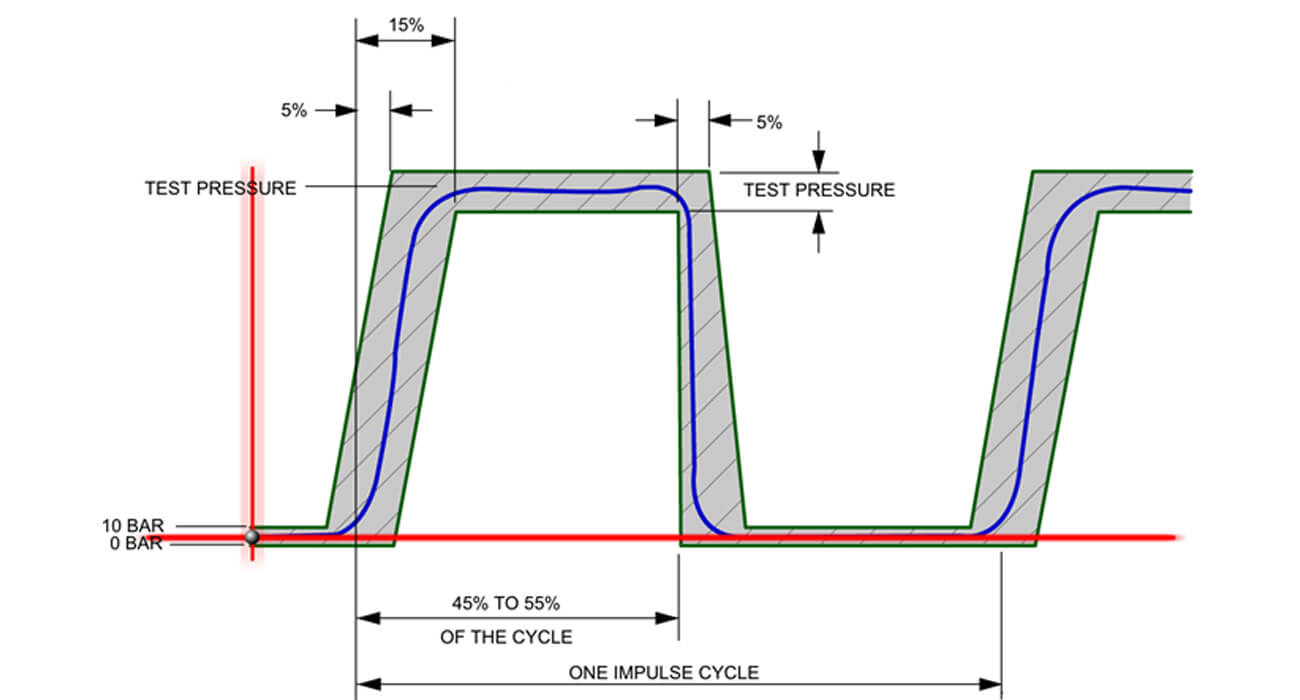 The shape of this impulse curve is strictly controlled to ensure standardised, consistent test results.

The rapid rise and fall of the pressure increase and decrease cycles must fall within the shaded limits.

For example, RYCO T14D ¼” one wire braid hose with a maximum working pressure of 225 bar (3,250 psi) and maximum working temperature of 100°C would be tested as follows:

Four ‘unaged’, or new, hose assemblies must be tested.

The rapid pressure increase is like hitting the hose with a sledgehammer, each second for more than 55 hours! It is even more difficult for spiral reinforced hoses.

That is almost 140 hours to complete the test at one cycle per second!

For example, 1″ SAE 100R12 four spiral wire reinforced hose with an SAE maximum working pressure of 276 bar (4,000 psi) and maximum working temperature of +121°C would be tested as follows:

Additionally, if the hose manufacturer claims higher temperature or higher working pressure capabilities, the hose couplings must be tested according to the higher levels.

This graph shows impulse test curves for hose types that meet the SAE pressure on the left, and for RYCO products on the right.

When impulse testing, the hoses appear to become tighter, and then release back to their previous position.

The point where they are tight is the high-pressure phase of the impulse curve.

During the impulse test, all the working conditions of the hose are at the highest and most demanding levels.

In typical applications, working conditions are nowhere near as severe as an impulse test, so in use, the hoses may last longer than the number of impulse cycles that the SAE and / or DIN specifications require.

This logarithmic graph can be used to estimate the number of impulses a given hose assembly will withstand at given pressures.

This point is where a hose assembly is expected to fail at its Minimum Burst Pressure (MBP), which is 400% of its Maximum Working Pressure (MWP).

As the assembly is expected to fail at this pressure, it can be considered to fail after one impulse.

This point is where the RYCO hose assemblies are expected to achieve the specification requirements for that hose type. In this case, 200,000 cycles at 133% of Maximum Working Pressure (MWP).

The PN curve can be used to estimate an accelerated impulse test.

The PN curve can be extended to estimate the expected impulses at or below Maximum Working Pressure.

However, it cannot be expected to be any more than a ‘rule of thumb’ as the number of expected impulses becomes so high it becomes less likely to be to achievable or even possible. At this point, the hose will be affected by ageing before mechanical fatigue.

The 4: 1 factor of safety applies to the hydraulic hose assembly and not to the connector terminations.

RYCO Hose assemblies require a higher factor of safety because being flexible, they are subjected to more dynamic stresses and influences than other system components such as valves, actuators, and tube work.

Stay in the RYCO KNOW HOW

To learn more about RYCO products, news and events, sign up to our newsletter here.

We use cookies to ensure the proper functioning of our website and to improve your experience while you navigate. This includes cookies that are necessary for you to browse our website and use its features.

We also cookies that help us understand how you use our website and assist in our marketing efforts in order to improve your experience and may include third party cookies. These cookies will be stored in your browser only with your consent. Visit our privacy statment to find out more about each category of cookie. You can choose to reject some cookies under "Settings". However, blocking some types of cookies may impact your experience of the site and the services we are able to offer. Your cookie settings will be saved for future sessions, and you may opt-out at any time by changing your settings.

Necessary Always Enabled
Necessary cookies are absolutely essential for the website to function properly. These cookies ensure basic functionalities and security features of the website, anonymously.
Functional
Functional cookies help to perform certain functionalities like sharing the content of the website on social media platforms, collect feedbacks, and other third-party features.
Performance & Statistics
Performance cookies are used to understand and analyze the key performance indexes of the website which helps in delivering a better user experience for the visitors.
Analytics
Analytical cookies are used to understand how visitors interact with the website. These cookies help provide information on metrics the number of visitors, bounce rate, traffic source, etc.
Marketing
Marketing cookies are used to assist our marketing efforts and improve online advertising performance. These cookies allow us to place personalized and relevant advertisements from third party Ads partners. We may upload your user identifiers received from these cookies to our Ads partner platform to help improve the personalization of our advertisements.
Others
Other uncategorized cookies are those that are being analyzed and have not been classified into a category as yet.
Core Functional
Functional cookies are necessary to ensure the proper functioning of our website and its essential features, such as travel service bookings and ticket issuance.
Infrastructure
Infrastructure cookies are necessary for you to browse the website and use its core features.
Security
Security cookies are necessary to ensure the required level of security of our website such as user authentication for secure payment and fraud prevention.
SAVE & ACCEPT